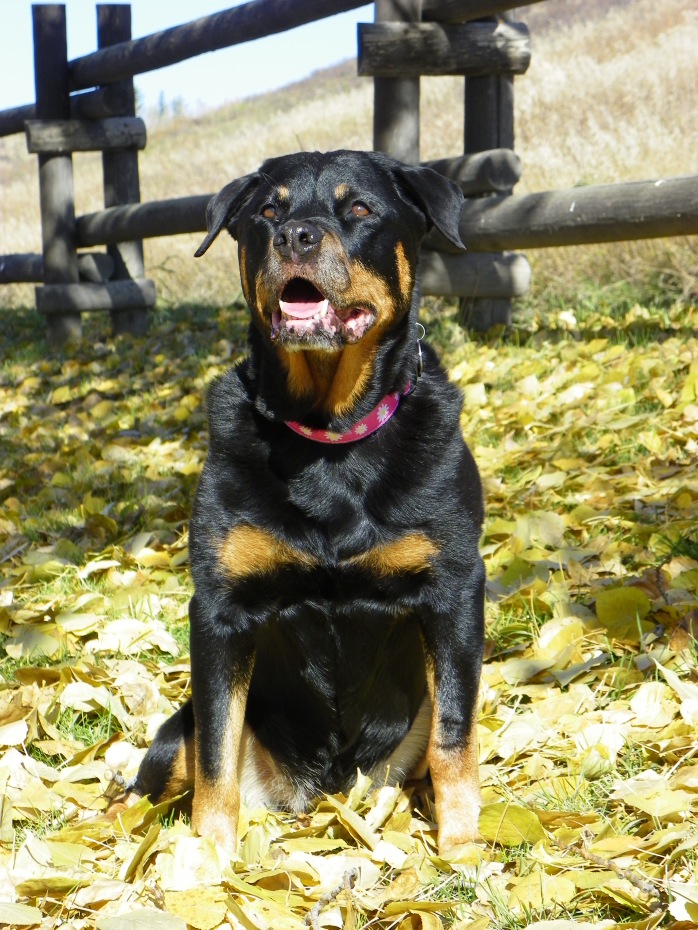 After a short wait, we got our beautiful little show bitch, Jewel, from Kirk and Terena McDonald of Shacoram Rottweilers. She was a pleasant girl with a beautiful temperament and excellent work ethic.   She began her show career as a puppy in the Spring of 2003 taking her first point at 8 months old!

Jewel was a prey-driven, play-driven, kong-chasing, ball crazy, full of fire little girl.  She was so willing to learn and please that it had been a pleasure being at the end of her leash.

Her ease of training was just amazing to me.  She was my second obedience dog and I knew I had to change a few things to make training for her more fun than I had with Justice.  So, we tried some different things and I found that play was something highly motivational for her.  With the guidance of my obedience trainers and club here in Calgary (Cal K9), we came a long way and I learned a ton from and with Jewel.

To her I owe so many things, and we learned so many things together.  Jewel was the foundation bitch of our kennel, so without her, there would be no Akamai Reg’d Rottweilers.

Jewel was a medium sized bitch, standing 23 inches (58cm) tall and weighing 75lbs.  She was lean and muscular in her prime, moved fast as lightening (for a Rottweiler) and was incredibly agile.

Jewel finished her Canadian Championship in just two weekends in the summer of 2004 after taking some much needed time off from the ring to mature (sitting on 4 points).  She had a successful trip to Cold Lake, Alberta in July where she brought home another three points with three Best of Winners ribbons and in Indus, Alberta going Winners Bitch two days bringing home another 4 points to finish. 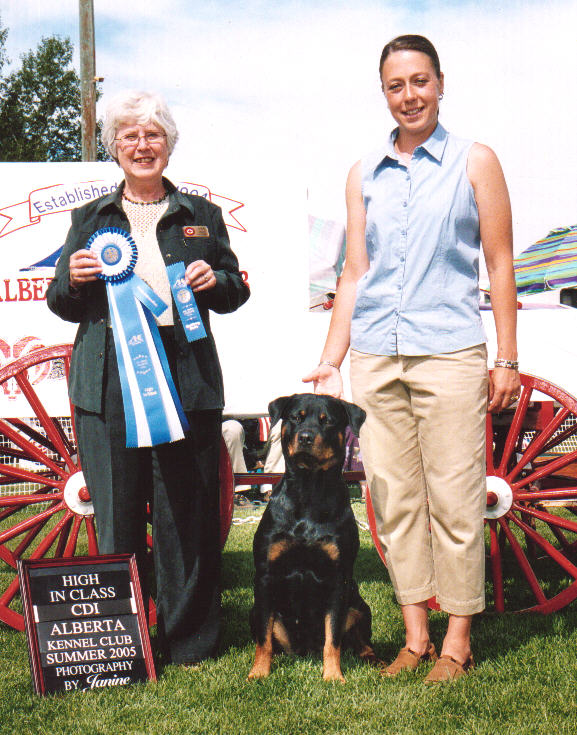 We had also been working hard towards some working titles.  In spring 2004, Jewel earned her BH title, then her herding instinct certificate in June 2004, followed a few weeks later in Lethbridge, Alberta with her first two legs of her CD title going High in Class for both legs!!!  She finally finished her CD title in Indus, Alberta (same day as her Championship) with another High in Class placement.

Then onto Edmonton and the RCC National Specialty in July; both mine and Jewel’s first Specialty!!!  Judging was done by world-renowned Rottweiler Breeder/Judge Isabel Nicol from Scotland, who breeds under the prefix “Jacraila”.  Jewel was owner-handled to a Reserve Winners Bitch placement taking home some nice ribbons, a lot of great loot and some awesome memories!!!  Jewel also earned her Canine Good Neighbor (CGN) title at the specialty!! Needless to say we were thrilled with the spring/summer of 2004!

Jewel was bred January 2005 to Multi V-Rated AOM Am/Select Can. Ch. Rothburg’s Kourage Under Fire CDX Am. CD DDX BH CS CI ZtP CGC HIC, and the ‘Harry Potter Litter’ arrived April 2, 2005 (7 girls and 3 boys).  From this breeding we kept Wicca.  You will find the information about this amazing girl on the Past Dogs page.

Summer 2005, after having all of those little babies and getting back into the swing of things, Jewel and I entered the obedience ring to try to obtain her CDI (Companion Dog Intermediate) title.  We did so in 4 trials with 3 High In Class placements, one of which was a 197 score (pictured above), all of which were over 190! And in November 2005, Jewel and I entered into the open ring for the first time; in a sort of experiment trial.  Well, Jewel came out of the ring with ANOTHER High in Class placement and her first leg towards her CDX title!  And she and Wicca both did another Herding Instinct test in November 2005, just for fun!  Jewel passed a second time with flying colors (although Wicca did score higher than her mother)!

February 2006, Jewel finished her CDX title with 2 more High in Class scores.  Finishing this title made Jewel eligible for the Rottweiler Club of Canada’s Honor Roll for 2006.

July 22, 2006, with her second litter only 7 weeks old, Jewel returned back to work to successfully earn her Temperament Test title along with 4 of her kids from the ‘Harry Potter’ litter.  Jewel also finished her APDT Rally Obedience Level 1 title on August 4, 2006 with scores of 190 and a third place in trial score of 207, and this was all just 9 weeks after her second litter was born!  She not only finished her title with some amazing scores, but with an Award of Excellence!

We were further surprised in February 2007 with a certificate in the mail for Jewel;  an APDT Rally Achievement Award, Canadian Top 20 with a National Ranking of #17!  How about that?

Jewel’s first attempt at APDT Rally Level 2 was a first place score of 203 and a HIGH IN LEVEL 2 award!  Whatta  girl!

October 6, 2007, at the Working/Herding Specialty in Red Deer, Jewel earned the second leg of her Obedience Trial Championship (OTCH or UD).  One month later, again in Red Deer, she finished her OTCH with a fourth in class placement.

What an accomplishment, this girl can do it all!

She also earned the first 2 legs of her Rally Novice title with a 96 and perfect 100.

Jewel finished off her ADPT Rally Level 2 title in March 2008 with a third and fourth place finishes.

I was very pleased to announce that Jewel has once again earned a National Ranking Award in APDT Rally in 2007, Canadian Top 20 APDT Rally Achievement Award ranking #12, bettering her 2006 placing by 5!

Jewel finished her CKC Rally Novice title in April 2008 in Red Deer under judge Isobel Hutton with a score of 98.

That same day she earned her first UDX leg qualifying in both open and utility in trial one!

She went on the next day, after moving up to Rally Advanced, to go High in Class with the only perfect 100 for the first leg of her RA title.

Jewel finished her Rally Advanced title in July 2008 with a 97, 94 (4th in class placement) and a bonus leg score of 95! This was the third rally titled earned in 2008 for Jewel, very exciting!

July 2008 it was also confirmed that Jewel made the Rottweiler Club of Canada Hall of Fame in 2008.

August 2008 at the AKC show here in Calgary, Jewel earned her second UDX leg with a high in class in utility and also earned 2 legs of her Rally Excellent title, both with high in class scores of 97 and 99!

She finished her Rally Excellent title in Cranbrook, BC also in August.  She did it with a 97 and a 94, which was also a high in class!

In Edmonton in September 2008, Jewel earned another High in Class in Rally Excellent and a second in class the following day!

In Red Deer in November 2008, Jewel earned the Highest Scoring Rottweiler Champion of Merit (sponsored prize) in Saturday’s obedience trial with her 192 from the Open B class.  She missed her UDX leg by a jump again in utility …sigh.  In rally on the Sunday she earned her first RAE leg with a High in Class in Excellent (97) and a Fourth in Class with a 98 (believe it or not!) in Advanced.

Jewel made her ring debut for the first time in just over a year.  She earned her third RAE leg with a second in class in excellent (score of 95) and a HIGH IN CLASS in advanced with a perfect 100!  And for her first APDT trial in 2 years, she earned a 201 … despite my awful handing… she had so much fun and I was absolutely thrilled to have her in the ring with me again!

So for a quiet, semi-retirement year, Jewel earned another 2 RAE legs and did some great work in APDT rally ….

Jewel started off her OFFICIAL retirement year by earning the first leg of her APDT Rally Level 3 title in March 2011, with a score of 200 under judge Tammy Brooks.  I feel now that we can finish this title and Jewel can fully appreciate a life of retirement!!!

Of course, it is hard to fully retire the dog who I have had so much fun with over the years and who does still enjoy working, so in July 2011, at the EKKOC show, Jewel went into the Rally Excellent ring and earned a High in Class score of 99, and then went into the Veteran’s obedience ring, one day after her 9th birthday I might add, and earned a High in Class score of 192.5!!!  Really, it is hard to retire a working girl like this!!!!

BUT, she does deserve an ‘official’ retirement, so in October 2011, Jewel was officially retired after finishing her APDT Rally Level 3 title here in Calgary at Sit Happens!  She earned the final 2 legs she needed plus a bonus ‘leg’, all with second place scores of 202, 201 and 204 under AWESOME judges Sarah-Jane Petti and Tammy Brooks.  She was great and worked hard for me and I was bitter-sweet about her retirement but I knew she would enjoy just being the Matriarch of the pack.  The APDT Rally Level 3 title is her 15th title and I feel she has had a very long and very productive working career.  As the icing on her working career we found out in early 2012 that Jewel also once again ranked in the APDT Rally Canadian National Rankings, she was #18, but the best part was that she ranked along with her daughters Wicca (#17), Moka (#34) and and her 2 grandchildren, Moka’s kids, Ruckus (#27) and Brenna (#31) … I couldn’t have asked for a better dog to work with all of those years!

We finally said good-bye to our beloved little Jewel on June 15, 2015, one month to the day shy of her 13th birthday.  She fought off rare skin cancer for nine months prior to her immune system finally giving out.  We cherished every day we had with her after her diagnosis in October 2014.

She is sorely missed, and completely irreplaceable.

I can’t ever imagine another dog like her …. Godspeed my little girl ….