Scotia came to us in early 2011 from Eirian Rottweilers in Ontario.

Not only does Scotia boast and AMAZING conformation background, but her working lineage is phenomenal.  Her daddy is the great Multi V1, Multi CAC Ch. Timo Von Der Scherau ZTP, BH, AD, VPG/SCH 1, who resides now at in New York with Carrabba Haus Rottweilers.

Her momma, Brava, was not only been a success in the conformation rings but she has a fabulous show and working pedigree herself so Scotia’s future is truly limitless ….

Scotia is and has always been very active in obedience, rally and carting and is my number one working girl!

Some of her career highlights to date are as follows:

She began her show career in Red Deer in November 2011.  Although she didn’t do anything, she showed me that this is also something she will have great ZEST for, and that makes me very happy …. as she matured she became something to look for in the ring …. even with that tail!!!

In October 2011, at just under 9 months old, Scotia got to experience sheep for the first time.  Well to say she expressed her usual over exuberance would be an understatement.  She didn’t pass her HIC, but she was very keen and just needed a little more restraint.

So just a little over a month later Scotia and I headed out to Phantom Ridge Ranch to work with instructor Louanne Twa.  Scotia showed that after about 20 minutes of working with Louanne in a pen with several sheep she CAN use her brain and she passed her HIC!!!  AND we went back for lessons for another year or so after!!!

In November 2012 we got back to working and showing with Scotia after the birth of my son Jaxon in June …. and she did not disappoint. Scotia went Winners Bitch and Best of Opposite Sex both days entered, on Sunday she also went Best of Winners (under judges Gail Forsythe and Guy Jeavons respectively) for her first 3 points!  It was a great first weekend back showing needless to say.

In December 2012 at the CKOC show in Calgary, Scotia went Winners Bitch, Best of Winners and Best of Opposite sex for 2 more points sitting her on 5.  That’s half way to her championship in just 3 days of showing …. nothing to complain about at all ….

In 2013 Scotia and I took up carting.  This is so much fun and with practical uses for Scotia pulling the cart, it was a fantastic new hobby for us.  May 31, 2013, Scotia became our kennel’s very first Draft Dog (DD) when she and I did our very first DD test in Edmonton, Alberta.  It was a great test, very well run by the Newfoundland Dog Fanciers of Alberta Club, and I was so very proud of my girl!

In Red Deer, November 3, 2013, we entered the obedience ring for the first time, and boy oh boy did she work like a dream and actually surprised me a little (since it was our ‘let’s see where we are at’ experiment trial after all).  She earned her first novice leg in the Novice B class by going High in Class with a 195.5!  I was beyond pleased with her work!!

After that ring (and not much after I might add) we entered the conformation ring and Scotia went Winners Bitch and Best of Winners for another 2 points towards her Championship!!

At the wonderful equestrian facility here in Calgary, Spruce Meadows, we attended the AKC show where we camped there all weekend to take full advantage of the four day show.  So we did just that, Scotia finished her Canadian Championship going Winners Bitch and Best of Winners on both Sunday and Monday, she started and finished her Rally Advanced title with a 95 (third in class), a 92 and High in Class score of 97 and in her only novice obedience trial for the weekend, she got the second leg of her CD title with a 190!

We were also entered in the RCC Regional Specialty on Sunday and much to my surprise, Scotia was awarded Reserve Winners Bitch in a competitive group of bitches and she was only one of two tailed class bitches so this was pretty nice.

Scotia finished her Novice Obedience title in September 2014 with 2 more high in class scores (190/196+) wtih a run off for the latter score … that weekend she also earned the first leg of her Rally Excellent title with a third in class score of 96!

Scotia had another litter December 27, 2014 (our ‘British Invasion Litter’) …. sired by UK Import Can. Ch. Hanbar Hendrix TT HIC, also known as Jimmy, who we had admired since he arrived in Canada.  From this litter we have our Grady as well ….

Now onto 2015 and back to work, Scotia earned one more leg to her Rally Excellent title with a third in class score of 91 and has started training towards her DDX.

2015 had proven to be a fairly busy one for Scotia.  Not only did she raise her litter of 8 early in the year, she also finished her Rally Excellent title in July with and 84 and an 92 (and a third in class) for a bonus leg.  In August she tried  her heart out for her DDX.  She and I didn’t pass but we were SO CLOSE we could taste it.  As well, Scotia also earned the first two legs of her Novice Intermediate title with a 192.5 and a 195.5 ….. and we are not done yet this year 🙂

In September, Scotia finished up her Novice Intermediate title with another high in class score of 190.5.  The following weekend she attended her very first sieger show, the RCC Canadian National Sieger show under ADRK judge and Kormeister Helmut Weiler from Germany.  Scotia never disappoints me, showing really well and running her heart out with me (even though some of it was admittedly excellent attention heeling) and earning herself a V2 rating!!  Her critique is below.

October 18, 2015, Scotia and I participated in the Newfoundland Dog Club of Canada’s 2015 draft test held in Bragg Creek, Alberta.

This was a VERY challenging course. I am very happy to announce that Scotia earned her DDX (draft dog excellent) at this test. What a heart my girl has, worked so very well with stamina to spare. Although I was nervous at times, I thoroughly enjoyed the test. This is the very first DDX earned by any of our dogs so this is a very special title indeed!

March 19 – 20, 2016 – Rose County Canine Association spring obedience and rally trials held in Spruce Grove, Alberta.  This was our first time doing UKC trials of any kind.  It sure was alot of fun and interesting being able to watch and see the various differences from CKC obedience.  Scotia and I had a good weekend, a full weekend.  It was 3 novice obedience runs and 2 novice rally runs.  Well I am happy to report Scotia was 6 for 6 and earned her UCD and her URO1 with multiple placements and High Aggregate in Rally Novice.

Scotia and I attended our first CARO Rally trial held here in Calgary and run by our friends Barb Burgess and Sarah-Jane Petti with TLC Training and Consulting.  So we were entered in all three rounds of novice rally, and one round of novice team which we did with Barb and Wicca.  Wicca just turned 11 on April 2 so this was a very special run for us, and we were honored to help her to complete her Novice Team title.  Scotia came away with her first novice team leg, but she also had some pretty amazing runs herself and earned her novice rally title (CRNMCL) with a second place score of 199, a third place score of 199 and a PERFECT score of 200 …. proud of this girl indeed!!!

In July 2016 Scotia and I tested out a new sport to the CKC called Chase Ability testing.  It is basically lure coursing on a smaller scale for all breeds.  The Foothills Gazehound Club held a set of tests the Canada day long weekend just outside of Calgary and Scotia and I did three of the tests.  She passed all three and earned her CA!  She had a blast chasing those ‘bunnies’ around the course!

August long weekend here in Calgary is always the AKC show, and this year we were only entered on the Friday.  After working really hard to get our open obedience work together, we entered in open and I am happy to report that Scotia earned her first Open leg with a second in  class and a 196.5! 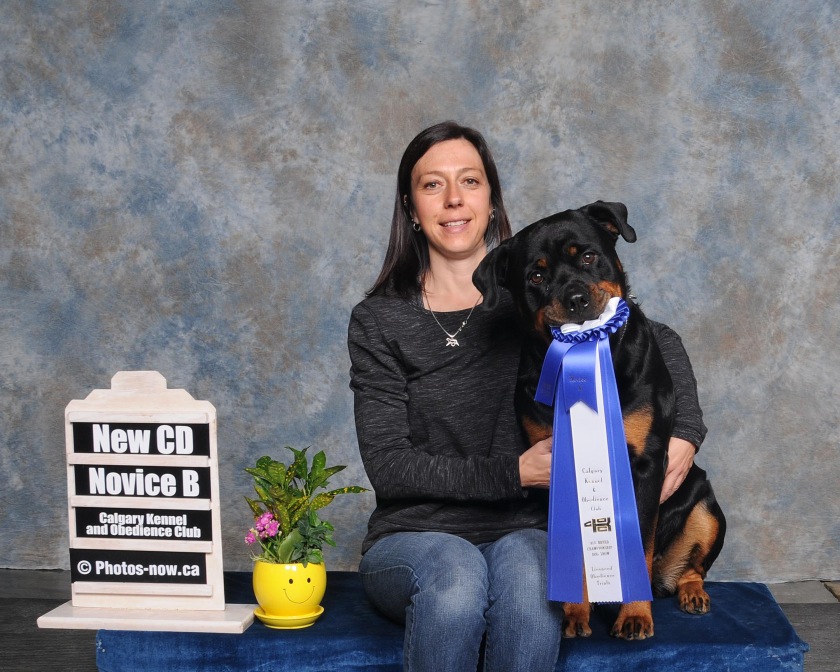 September 10-11, 2016, back up to Edmonton we went to more UKC trials with the Rose Country Canine Association.  Awesome trials once again.  Scotia had many runs this weekend. 6 in total, and she came out of it 5/6, two legs of her UKC CDX title (one missed drop on recall was the only error she made) and her UKC Rally Level 2 title!  AND, I am thrilled to report that Scotia not only was HIGH IN CLASS in all 5 of her qualifying runs, but she was also awarded HIGH IN TRIAL for her open B round Sunday with a score of 193!  This is both Scotia and my very first High in Trial!  I was so proud of her.

In November 2016, Scotia and I attended two separate show/obedience trials, trying to wrap up that open obedience title in 2016 so 2017 can be focused on utility and Grady.  Well, despite a few hiccups, she did it.  In Red Deer in early November she earned one more leg, and at our Cal K9 trials at the end of the month, she finished her title with a respectable 192, along with High Scoring Rottweiler and Working dog awards.  So proud of my girl!!!!

2017 is off to a roaring start for Scotia, we found out early in the year that she was the #4 Rottweiler in Obedience in Canada for 2016!

She also wrapped up her UKC Open title in March with two high in classes, a third in class, a HIGH IN TRIAL and HIGH AGGREGATE for obedience for the weekend.  This was all again, at the Rose County Canine Association trials, which we love to participate in because the club puts on great trials and are super friendly and inviting.

March 2018 in Edmonton at the RCCA UKC Trials Scotia was there to play in Rally Level 2 and she had 2 fabulous rounds with both first place scores of 100, she was also awarded RALLY HIGH IN TRIAL!

Scotia has had some fun playing around in Rally this year, accumulating scores for final end stats!

In September, Scotia earned the first leg of her UKC Rally Level 3 title with a second in class, second to her daughter Grady!

2019 began with both Scotia and her daughter Grady earning their Novice Trick Dog titles during the coldest February on record in Calgary in decades.  In July they both completed their Intermediate Trick Dog titles!

In August at the AKC show here in Calgary, Scotia earned the first two legs of her RAE title, all runs with placements!

Scotia earned 106 of the 150 points needed to complete her  Novice Sprinter title at two tests in August and October 2019 … pretty good for over 8.5 years old!  As well she earned another RAE leg at the Red Deer dog show in October 2019 with a second in class in Advnaced (99) and a High in Class in Excellent (100).

Scotia started off 2020 earning her Advanced Trick Dog titles through Do More With Your Dogs! She earned another RAE leg at the Bernese Mountain Dog Rally trials in September and then she finished her Novice Sprinter title in October. 2020 was slow due to Covid but ended up not too bad!